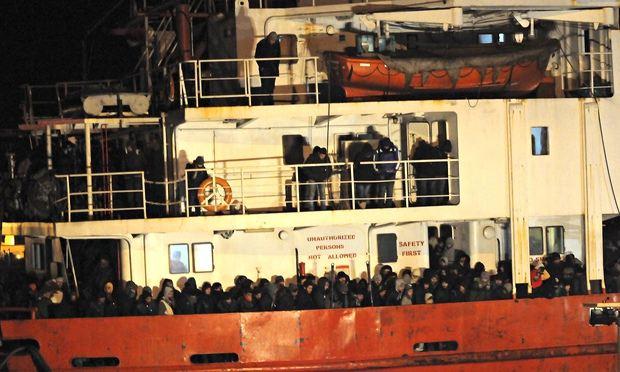 Almost 1,000 illegal immigrants have landed in Italy after threatening to throw babies into the sea if their rusting ship was turned back.

The 240ft Monica had been spotted in international waters during the night. When Italian coastguard boats drew alongside, the crews were shocked to see men and women on board begin dangling the infants over the side.

A coastguard spokesman told of the drama when the ship, illegally flying the flag of Tonga, was intercepted.

He said: ‘When officers tried to draw alongside they were shocked to see those on board threaten to throw babies overboard.

‘They were hanging them over the side and told the coastguards not to come any closer or they would let go. Our men had never seen anything like it.

‘They only calmed down and let us on board when we assured them they were in Italian waters and they would not be taken back to where they had sailed from.

‘I understand they are mostly Kurds and many have said they were using Italy as an entry point before heading towards Britain.’

The ship was towed to the Sicilian port of Catania, where 400 men, 200 women and 361 children were taken to Red Cross shelters.

Italy’s long coastline makes it one of the EU’s main targets for migrants. Many head north to Milan, hoping to hide in trucks and trains to the Channel ports.

He said the immigrants would be granted asylum and Sicily would be given emergency funds to cope with them.

Italian officials said they were still not sure whether the Monica had sailed from Lebanon or the Turkish part of Cyprus. The ship’s crew were being held by police.

The Archbishop of Catania, Luigi Bommarito, was at the dockside to greet the Monica in what he called ‘a gesture of solidarity’.

David Cameron won’t make such a show, because he knows the British public would go wild, but he’ll let them in anyway. And if they treat their own children like that, how are they going to treat theunfortunate Brits living near their new taxpayer-funded flats?